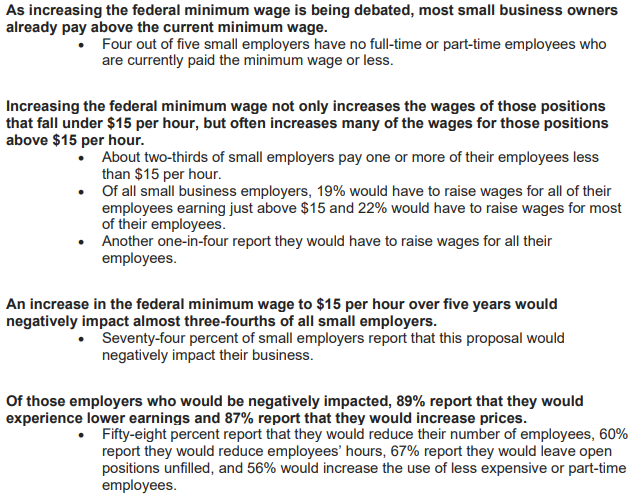 If only someone could have predicted this…

A new study published by University of Washington economists found that, as conservatives long argued and as basic economics would seem to have predetermined, Seattle’s unprecedented minimum-wage hike actually hurt the very workers it sought to help.

Specifically, the economists found, as businesses were forced to devote more of their revenue to payroll, they scaled back workers’ hours by nearly 10 percent.

It’s worth noting that these findings are preliminary, not yet subjected to the scrutiny of peer review.

When politicians do things like hike the minimum wage and impose expensive regulations on businesses, many businesses can’t afford it and close shop. The huge corporations tend to do OK because they have the resources to absorb the cost and pass it on to their consumers, but small businesses don’t have that luxury. They just quietly close up shop and there aren’t any news stories. And then the same people who supported the increases in minimum wage and regulations moan about the dearth of small businesses being able to compete with the “big box” stores. Here’s one story of one business that couldn’t take it anymore.

Former Cantina 1910 employees said they were shocked to find out late Sunday evening of the closing, DNAinfo reported.

“We are unable to further raise prices in this competitive restaurant market in order to sustain the labor costs necessary to operate Cantina 1910,” Mark Robertson and Mike Sullivan, Cantina 1910’s owners, said in an emailed statement to The Daily Signal.

“Unfortunately, the rapidly changing labor market for the hospitality industry has resulted in immediate, substantial increases in payroll expenses that we could not absorb through price increases,” the restaurant’s owners said. “In the last two years, we have seen a 27 percent increase in the base minimum wage, a 60 percent increase in kitchen wages, and a national shortage of skilled culinary workers.”

The owners say they “do not see a path forward” with mandatory paid sick leave and minimum wage set to increase in 2017. They stated:

As we look down the road, we are facing a Dec. 1 change in federal labor regulations that will nearly double required salaries for managers to qualify as exempt, a 2017 mandatory sick leave requirement and another minimum wage increase. Coupled with increasing Chicago and Cook County taxes and fees that disproportionately impact commercial properties and businesses, we are operating in an environment in which we do not see a path forward.

Early evidence from the Bureau of Labor Statistics (BLS) on Seattle’s monthly employment, the number of unemployed workers, and the city’s unemployment rate through December 2015 suggest that since last April when the first minimum wage hike took effect: a) the city’s employment has fallen by more than 11,000, b) the number of unemployed workers has risen by nearly 5,000, and c) the city’s jobless rate has increased by more than 1 percentage point (all based on BLS’s “not seasonally adjusted basis”). Those figures are based on employment data for the city of Seattle only (not the Seattle MSA or MD), and are available from the BLS website here (data are “not seasonally adjusted”).

Update: The chart below shows that while the city of Seattle experienced a sharp drop in employment of more 11,000 jobs between April and December last year (light blue line, BLS data available here), employment in Seattle’s neighboring suburbs outside the city limits (Seattle MSA employment minus Seattle city employment) increased over that period by nearly 57,000 jobs and reached a new record high in November 2015 before falling slightly in December.

Bottom Line II: Additional evidence showing that while jobs in the city of Seattle were tanking starting last April, employment in the suburbs surrounding Seattle was increasing steadily to a new record high in November. That departure in employment trends: job declines inside the city limits of Seattle compared to increasing employment outside the city limits suggests the possibility that the difference in labor costs could have been a contributing factor. Yup. It’s almost as if the laws of economics were at play… hmmmm…

A Federal Reserve Bank of San Francisco review paper recently found that minimum wages had “directly reduced the number of jobs nationally by about 100,000 to 200,000.” And now a new survey of recent data by Jed Graham of Investor’s Business Daily (h/t RCP) found that minimum wage hikes seem to have taken a toll on hiring in some of America’s major metropolitan areas

Minimum Wage Hurts the Young and Lesser-Educated the Most

Yeah, pretty much. The push for a higher minimum wage is forcing the automation in the restaurant industry that inflated union wages did for the automotive industry decades ago. It’s not politics. It’s math.

Of course, it’s possible to imagine all kinds of dramatic productivity enhancements. Persona ­Pizzeria’s Miller predicts that drone delivery systems will eventually get rid of the need to come into a restaurant at all, for example. Brewer has a bold prediction: He thinks that all the automation working its way into restaurants could eventually cut staffing levels in half. The remaining employees would just need to learn how to operate the machines and fix things when they break.

“You don’t want a $15-an-hour person doing something that the person who makes $7 an hour can do,” Brewer said. “It’s not downgrading the employees. It’s that the employees become managers of a bunch of different systems. They’ll become smarter and smarter.”

Admit it… you thought Germany already had a minimum wage, didn’t you?

BERLIN (Reuters) – From charging slaughterhouse workers for their knives to compensating staff with tanning salon vouchers, German employers are coming up with creative ways to avoid paying a new minimum wage, angering unions.

Chancellor Angela Merkel’s government introduced Germany’s first nationwide wage floor of 8.50 euros per hour early this year. The law was the brainchild of the Social Democrats (SPD), who made it a condition of joining Merkel’s coalition in 2013.

The centre-left party argued that it was a necessary response to the sharp rise in low-wage jobs over the past decade. Some 3.7 million people were expected to benefit.

But in the months since it went into effect it has become clear that not everyone is taking home more pay. The NGG food and catering union is fielding up to 400 calls a day from people who say their employers are finding ways to circumvent the law.

A group of low-wage workers hopes to use an obscure 101-year-old state law to force Wisconsin to boost its $7.25-an-hour minimum wage.

On Wednesday, Wisconsin Jobs Now plans to present petitions from about 75 workers who say they are paid wages that are not self-supporting. The group said that violates a state law dating back to 1913 requiring that the minimum wage in the state “shall not be less than a living wage.”

The “living wage” law, which Rickman said is unique to Wisconsin, requires the Department of Workforce Development, after receiving a “verified complaint,” to investigate and determine within 20 days “whether there is a reasonable cause to believe that the wage paid to any employee is not a living wage.” The law further defines a living wage as one needed to maintain “minimum comfort, decency, physical and moral well-being.”

This won’t go anywhere, but it is an interesting way to go about it. It is also a good reminder that it is as important, if not more so, to remove old laws as it is to pass new ones.