“the needles and spoons are here to stay”

“We have the worst heroin problem in the nation in the Chicago area,” says David Cohen, a recovering heroin addict who counsels addicts at Insight Behavioural Health, a treatment centre. Greater Chicago has the highest number of emergency-room visits related to heroin in the country with 24,627 visits in 2011 (the latest year for which records exist), compared with 12,015 in New York. In Chicago 35% of substance-abuse treatment admissions are for heroin, compared with 16% nationwide. And demand, especially from young women, keeps rising: on the city’s west side business is booming at what insiders say is the largest open-air drug market in the country.

Heroin hit the Midwest harder than other places because the coasts learned to deal with the problem in the 1960s, and are thus better able to handle its resurgence, says David Ferguson, a medicinal chemist at the University of Minnesota (see chart). Midwesterners, especially in rural areas, are less aware of the dangers. They had to learn how to fight drug traffickers, mostly from Mexico, who use Chicago as a transport hub for their wares. The Midwest and the South also have far fewer treatment centres for addicts than the north-east. 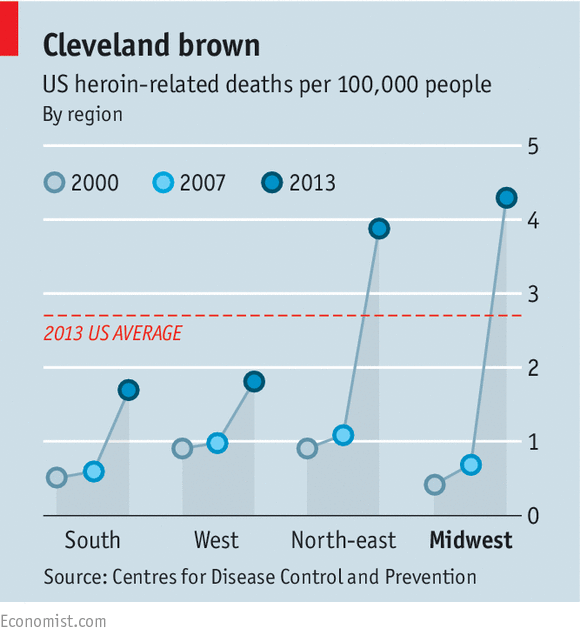 The heroin epidemic in the Midwest is closely linked to the rampant opiate epidemic. As doctors prescribed opioid painkillers such as OxyContin more and more liberally, their abuse grew. Sales of prescription opioid painkillers have increased 300% since 1999, according to the federal Centres for Disease Control and Prevention (CDC), even though the amount of pain Americans report to their physicians has not changed.