Great Basin National Park workers found the Winchester Model 1873 propped against a tree in the desert in November. 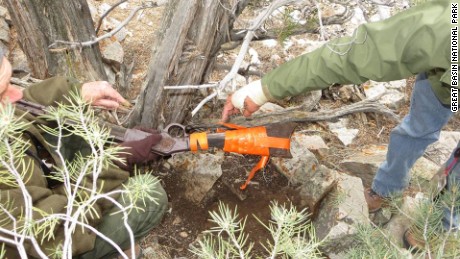 National park staff taped the butt of the Winchester Model 1873 rifle to the gun to keep them together.

Who knows how many years the rifle stood there, after someone left behind the model called “the gun that won the West.” Did they have to depart in a hurry — running from danger?

Or did they not see it, as it stood neatly camouflaged against the arid trunk of the juniper tree?

Wind, snow, desert sun have beaten years of furrows into the Winchester’s grayed stock, and rusted its barrel brown, along with its receiver and signature figure-8 repeating lever.

But its model name remains steadfastly engraved on its tang, along with a serial number. The Great Basin National Park‘s staff checked it against the Cody West Firearms Museum’s records.

← Walker Wants To Appoint WHEDA Board Getting a Leg Up →