Hard to believe that it’s been 25 years since The Trade.

Johnson never stopped working the picks he collected in the [Herschel] Walker trade. In his five years in Dallas, he made 51 trades, almost all of them involving draft picks. “I was playing fantasy football before there was fantasy football,” Johnson says.

“You know what it was like?” Mays says. “It was like he was sitting at a blackjack table and playing every hand. Which is something I’ve seen him do.” 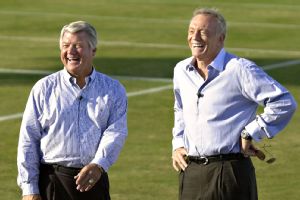 Walker would help the Vikings make the ’89 playoffs, where they lost to the 49ers in the first round. But both he and Lynn could only look on as Johnson & Co. sped past them to Super Bowl championships in ’92 and ’93.

Alas, Johnson and Jones let their egos get the best of them after the ’93 season, though the Cowboys did win another Super Bowl in ’95 with many of the players from the Johnson years. “I really think if Jimmy had stayed,” Wannstedt says, “he would’ve won five Super Bowls.” (Wannstedt and Johnson are once again on the same team: Fox Sports.)

← The Snappening Boots on the Ground Will be Needed →