Bo Black, who was the legendary powerhouse behind Summerfest for years, has passed away. I must have been hiding under a rock, because I didn’t know this:

Black became a Playboy cover model in 1967, after attracting a magazine scout’s eye while she was just 21 years old and a cheerleader at the University of Wisconsin-Madison. 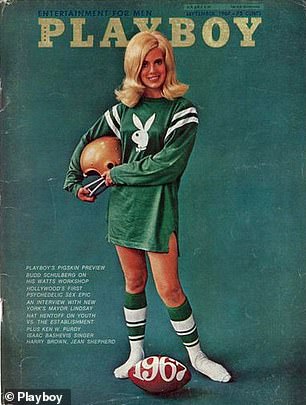 Black appeared on the cover of the September 1967 issue of Playboy, despite refusing to pose naked inside the magazine

Black posed for the scout – in town looking for co-eds to feature in the upcoming college issue – while wearing a short brown skirt and yellow turtleneck sweater, earning $25 for the trouble.

Black, a Catholic who went to mass daily, said that she didn’t tell her parents what she’d done because her ‘mother would have had a fit,’ she told the Arizona Republic in 2018.

The jig was up when someone from Playboy called Black’s home because they’d liked her photo and wanted her to pose for the cover.

Black said that her parents finally agreed to let her participate in the Playboy shoot as long as she kept her clothes on.

That was how she wound up being featured in the now iconic September 1967 Playboy cover, wearing a green-and-white jersey and matching knee socks, while holding a football helmet under one arm.

She received $100 as payment for the cover shoot, but could’ve made $5,000 if she had agreed to pose naked for the magazine’s centerfold – which she refused to do.

‘Are you kidding?’ I wanted to be a nun!’ she told the newspaper.

Anyway, Godspeed to someone who did so much for Wisconsin.